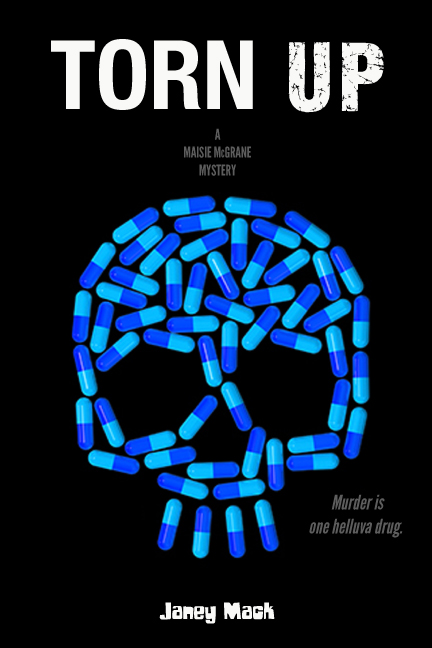 Tainted heroin is nothing new in the Windy City, but when a prominent socialite OD’s in a nightclub owned by the Mob, the DEA taps deep-cover cop, Maisie McGrane, fresh off a stint with a notorious Mexican cartel.

Cruising the upper-crust club scene, an epidemic of dead junkies drive Maisie and her tough-guy partner, Lee Sharpe, deeper into the dark world of designer drugs. When her overprotective cop brothers step in to investigate her erratic and extravagant behavior, Maisie finds herself in a desperate scramble to find the source of the killer drugs before her Irish clan stages an intervention or worse, blows her cover.

The cruelest emotion is hope.

Clear and coherent? Not an option. Not on my watch.

I felt around on the nightstand past the Stoli bottle to the orange and white prescription bottle of avoidance fog, aka Ambien, the tips of my fingers ice cold and nerveless. I knocked it over. It landed with a disturbingly quiet plastic click on the nightstand.

Maybe the bottle hadn’t been half-full. Only I knew it was.

There’d be more in the bathroom. I swung my legs off his side of the bed and stood up, weaving slightly.

Easy does it. Stay groggy, my friend…

I walked into the limestone and teak bathroom and made a beeline to the far sink medicine cabinet. The haze was lifting. And I couldn’t have that.

I just couldn’t have that.

Behind the mirrored door, five bare glass shelves gleamed in the fluorescent light.

I pulled out the drawers, opening the cabinets. My breath coming in short pants. All the usual cosmetic suspects present and accounted for. I reached for his drawers and stopped.

Not gonna go there.

The bathroom door shut behind me, followed by the sound of the lock sliding home.

A note card poked out from beneath the door. I bent over and picked it up.

Blinking, I focused on the bathroom door. Wilhelm had reversed the knob while I was passed out. Emptied the Ambien bottle as well as the medicine cabinet. A set of folded sweats and underwear rested on the side of the tub.

I considered climbing into the giant Toto tub and going back to sleep. Only when I woke up, the haze would be totally gone. Surrendering, I stripped down.

I stepped into the shower before turning it on, hoping the shock of cold water would make me feel something. Anything.

A pleasant 90˚ rained down upon my head.

I cried some, then. Surprised, actually, that I had any tears left.

Sometime while drying my hair, Wilhelm unlocked the bathroom door. I walked into the bedroom. The valet had changed the bedding, drawn the blackout shades, opened the windows, dusted, vacuumed and erased every sign of my grief hibernation.

Efficient to a fault.

I sprinted into the back corner of the walk-in closet.

Hank’s clothes were still in the hamper. I fell to my knees and pulled out his black t-shirt. I pressed it to my face.

Paco Rabanne, leather, gun oil and somewhere, underneath, the faint pheromone magic that was Hank.

He’s coming back. He has to.

I flipped his tee-shirt over my shoulder and dragged the hamper across to my set of built-in drawers. The bottom one was empty. I folded Hank’s dirty clothes and put them in the drawer.

He’s okay. Keep the faith and don’t be so goddamn weak.

I removed the canvas liner of the hamper and put it in the drawer, too.

God, I need a drink.

Bare feet padding on the smooth stained-concrete floor, I headed down the hallway towards the wet bar, praying that Wilhelm hadn’t turned into a complete mongrel and locked up all the booze.

I rounded the corner and stopped short.

Lee Sharpe sat at Hank’s kitchen counter, eating homemade macaroni and cheese. A silver cloche waited atop the other place setting, an open bottle of a Spanish granache between them.

At least Wilhelm hadn’t gone full-parent on me.

Lee looked up. “Hiya, Bae,” he said sweet as pie. He was handsome in a hard, uber-fit sort of way, with high-planed cheekbones and close set eyes the color of cool river mud. Carrying that dense well-defined muscle that only shorter guys can carry.

His navy suit coat lay across the bar. The dark shadow of the Sig Sauer in his in-waistband holster visible through the fitted Italian dress shirt. He was doubled up with a black leather shoulder rig for his other Sig.

Cripes. “What are you doing here?”

“Why don’t you tell me, partner? Last I checked, Sawyer gave you a week off. It’s been ten days.” He raised a hand and ticked-off his fingers. “No call, no text, no response. Or is that how things work for the hotshots at the Bureau of Organized Crime?”

Ignored responsibilities rained on me like heavy mortar fire.

I hadn’t spared an errant thought in all that time. Not for my family or Lee. Not for Sawyer, the BOC or any member of the seamy criminal quagmire Lee and I had been swimming with.

He squinted at me. “You sick?”

“No.” I walked over, took the stool next to him, and filled my wine glass to the rim. “Skål.” I threw half of it back in a long swallow.

“What’s the matter?” he said. “Bannon supposed to meet you for a week of hearts and flowers and he stood you up?”

My eyes flickered across the room to the fat legal file on the coffee table. Strings knotted tight together. I shrugged. “Something like that.”

Only much much worse.

“Christ.” Lee reached over and raised the cloche off my plate.

A steam of gruyere, rosemary and parmesan wafted up from the ramekin. It may as well have been stale cigarettes. My fork loitered above the golden brown breadcrumb topping, uninterested.

We ate in silence. Unable to taste it, I matched him robotically bite for bite.

Lee dropped his fork with a clatter and spun to face me. “I’m busting my ass and you leave me playing “Number One Body Guard” to an apartment full of Serbian mobsters awaiting your return like it’s the goddamn second coming.”

“Our cover’s so thin it’s fucking Saran Wrap. What if Renko comes back? You ever consider that?”

He won’t. Stannis was with Hank, and… Oh God.

“Or the more obvious? Slajic sends a new Renko to run Chicago?” He shot me a positively Satanic leer. “I’m sure he’d love to meet the girl claiming to be his gay nephew’s wife.”

It was as if he’d struck a match.

Goran Slajic the king of the Serbian underworld had hand-picked Hank to keep Stannis from going off the rails. He would know what happened to them. And if I played my cards right, so would I.

“Christo Keck, Stannis’s right hand man, is the one who suggested it.” I said. “He said it’d be better for the men, better for the people Stannis did business with.”

“Better for Keck, that’s for damn sure. Don’t think he won’t sell you out the first chance he gets.”

I shrugged. Did it even matter anymore?

Lee leaned in close, a breath away. “Pity party’s over, Bae. Fix yourself the hell up and get your ass downtown, pronto.”

After applying a half-hour’s worth of makeup, including fake eyelashes to a face I no longer recognized, I slipped into a lipstick red Alexis mini dress that somehow worked with my copper-colored hair and a pair of nude Jimmy Choo caged booties. I surveyed myself in the full length mirror in the walk in closet.

The aesthetic that Stannis Renko insisted upon.

Time to feck good things up for bad people.

I climbed into Hank’s gift. A tar black Dodge Hellcat and turned on the stereo. Al Green’s “Love and Happiness” filled the car. The SD card of music he’d compiled was a shuffling surprise of heartache.

When I merged on the freeway, I hit the pedal like any girl who had a father and three older brothers were on the force. To the metal.

Twenty minutes later, I pulled up in front of Stannis’ midrise industrial rehabbed building on the trendy West Loop. I swiped my card key and pulled into the private underground garage, parking next to Lee’s highland green Mustang.

I left my bags and purse. Stannis preferred his women to carry nothing. And after several months of using his men’s pockets as my travelling purse, I was not only used to it but liking it.

I got into the elevator, swiped the key card against the scanner and pressed the P for Penthouse, feeling better the higher I went. I needed to re-start Renko’s chop shops for the BOC anyway. The infrastructure was there and no matter what Lee thought about Keck, he’d be my way into Slajic, and ultimately Hank.

The doors opened on a brawny grey-suited man with dead eyes and skin like steel wool. He bowed his head and then reached forward to hold the elevator door for me. “Mrs. Renko.”

I crossed the foyer and heard Srecko Markovich’s halting English. “Ten. Ten days she is not here. Answers no phone. Anđeo is our duty. Keck tells us so. Where is she?”

Atta’ boy, Srecko. Give him the business. He can take it.

“Last time, Markovich, so hear it.” Lee’s tight staccato echoed through the hall. “Mrs. Renko will not be disturbed.”

Srecko smacked his hand against the table. “Is bullshit!”

I crossed the living room in long, bored strides.

Lee’s lack of emotion was kerosene on the fire to the ropy, somewhat adorable deep-dimpled killer. “You are nothing. Not known to Stannislav.” Srecko spat on the floor. “Where is she?” His hands clenched into fists.

I lifted a Baccarat crystal vase off an end table, raised it to shoulder height and dropped it. It hit the marble floor like a glass grenade.

Lee skirted the broken glass and held out a hand to me, eyes forward in the implacable essence that is the eternal Marine, steadying me as I stepped over the glass shards.

As he escorted me down the hall, I glanced over my shoulder at the brothers. “My things are in the car.”

They stood, fastened their suit coats and went to collect them, leaving Srecko to contemplate the error of his ways.

LOOK FOR TORN UP IN 2017 AT THESE FINE RETAILERS

GO UNDER THE COVER