LONG AND SHORT REVIEWS: CHOKED UP 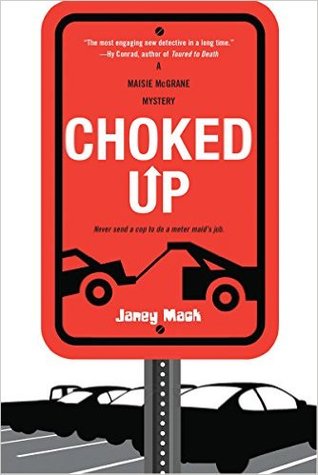 Maisie absolutely hates being a meter maid. Absolutely! She could have been part of Mayor’s elite team but she turned it down. He’s crooked and cruel and an asshole in general. She’d do meter reading rather than work for him. Her dad has blocked her from police work by making her psych test teacher mark her not suited to the job. Life is not as happy as she would like it, but she does have Hank.

This author has a lot of similarities to Janet Evanovich. She makes her female character strong on the outside with some weak points inside and throws her in situations no one would like to be in. It’s a good thing Maisie can think on her feet and lies so well. Of course, with a house mix of brothers and a dad who are cops and the rest of the family are lawyers, it shouldn’t be so surprising.

When Maisie gets a chance to go undercover, she’s excited! Here’s the opportunity to excel at something her father can’t stop. It’s also easy to keep it a secret because she’s still working as a meter maid during the day. Her only concern was that Hank said he wouldn’t sleep with a cop and she’s not sure how long she can hide it from him.

Only Maisie could be the target of a hitman and get saved by gangster. The Serbian man is involved in a lot of schemes but he likes her spirit. When she has to spy on him, she hates it. She likes him a lot. He’s gay, so it’s no threat to her relationship with Hank. Then a photographer puts their picture on Facebook and her brothers see it and forward it to Hank.

There’s a lot going on that Maisie doesn’t understand. A lot of Hank’s life is a secret. It’s a good thing he’s working on saving her, because she needs it.

This author writes well and keeps your interest all the way through the story. Her characters are unforgettable. There’s another book in this series coming out in 2016 and I’ll be watching for it. Maisie’s life is getting more and more interesting and I want to see what’s going to happen next.