Maisie McGrane is a traffic enforcement officer aka meter maid. It’s a bad enough job on its own, but considering three of her family members are cops and three are defense attorneys, well, she’s at the bottom of the employment totem pole.

Her personal life is much better–at least in the boyfriend department. She’s got a smoking hot boyfriend whose job is, well, better not ask about that in too many details. Her dad tried to break them up, so things are a little strained there. Her brothers are overbearing, pushy, and protective, too, just like most brothers.

When Maisie finds a dead body on the car she’s driving (her boyfriend’s), it’s a sign of very bad things to come. Maisie ends up with teenagers egging her ticket-mobile, a killer out to get her to spite her boyfriend and a benefactor she’d rather not know—a Serbian mobster nicknamed The Butcher. She’s also recruited to work undercover—as a meter maid? Seriously? Yep. The irony of it all. It seems there’s a group of car thieves working in the area. They tow a car and either strip it, chop it or ship it to foreign countries for a lot of cash. Maisie’s job as meter maid is the perfect cover for spotting tow trucks in the act.

Poor Maisie, her boyfriend said he’d never date a cop. A meter maid is okay, just not a full-fledged cop. Now she is one. Her brothers and Dad are hovering, mother being helpful, and Maisie’s keeping secrets from all of them—including the Serbian.

It’s hard to tell much more of the story without giving away important, telling clues. Suffice it to say, this is a quirky mystery, full of suspense, fast action, tricky situations, and lots of humor. It’s a fast read, not only because the story is so good, but because readers will be chomping at the bit to find out how it ends, all the while, wanting the story to last.

This is the second in the Maisie McGrane Mystery series with Time’s Up being the debut. Find them both. Read fast. Hope Mack writes faster than you read. 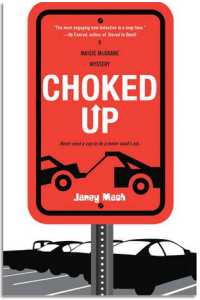